Last Saturday I took part in the Rotorua Half Ironman; my first half IM on a challenging course. It was a 5.45 a.m., swim start for us ‘slowbies’, which meant a 3.45 a.m. breakfast. I don’t think I slept after midnight, but had already read that the sleep you get on the night before an event is not as important as the sleep of the previous night. Just as well. It was a stunning morning, but a chilly seven degrees when we arrived at the lake. 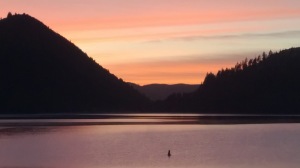 The 2km swim went slightly better than expected. I had imagined myself taking more than an hour to swim the 2km, but did it in 54 minutes. Due to the split start there wasn’t any chaos as we began. I guess I can count on the Port of Tauranga Half IM to give me that valuable experience. Finishing the first lap I saw Louise beside me, which helped. I’m still learning to ‘sight’ and find myself keeping fairly close the the markers and the buoys. On the second lap we spread out more, and it was encouraging seeing the faster swimmers coming towards us as they began their swim,  45 minutes after our start. I knew that my time wasn’t excessively slow.

My transition was SLOW. I entered transition just behind Louise and she was gone at least five minutes before me. Even then I forgot my gloves and sun glasses.  I felt very much like a beginner at this game. I loved the ride out to Lake Rotoma. There were only two major hills; Tikitere and Tarawera Road and knowing that, made for a fairly comfortable ride. 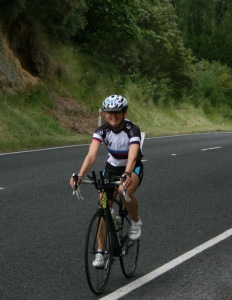 With the ride done, came the biggest challenge of the day – the run. This should have been the easiest  since that’s where I have some experience. I’d planned to run about 15km maximum, as I’m still recovering from Plantar Fasciitis. My longest run since May was the 10km at Tri Maori, a month ago. In theory I should not have increased my running time by more than 15 minutes, but that would only have got me to around 12km. The run around the edge of the Blue and Green lakes is all ‘off-road’ and reasonably undulating. It’s an ‘out and back’ course, so I had no alternative but to run or run/walk the whole 21km to get back to the finish line. There were no issues with my Planter Fasciitis, but I felt pain in the ball of my right foot from the start of the run, which became more intense until the last 5 km where I couldn’t run on the flat, or up hill. Of course I had to run into the finish line, pain or no pain!

They say it’s finishing that matters, not the time. I’m not so sure. As long as you set yourself a realistic goal there is a great sense of achievement in meeting it. My swim was faster than expected and I completed the ride in under four hours, which was another goal. The run was always an unknown… and remains that way as my timing chip didn’t work on the finish line.

Overall, apart from the foot pain, I had a great first Half IM experience. I am looking forward to seeing what I can achieve on a flatter course in Tauranga in early January, with four more weeks of training under my belt.

Learning from the weekend:

The foot problem seems to have been caused by something call ‘Hot Foot’. I Googled foot pain and cycling, after somebody suggested that the problem could lie there. I had symptoms of Hot Foot where the pain is caused by pinched nerves going from the ball of the foot to the toes. It is usually caused by cycling shoes being too narrow, or wrong placement of cleats. Following suggestions made on one of the websites, I came to the conclusion that my shoes are far too narrow… So off I  went to the cycle shop yesterday to look at wider fitting shoes.

I may need to look at getting a new saddle for my bike.  I will persevere, but I think I’m getting uncomfortable far to soon on the long rides.

What next? My goal for the next couple of weeks, apart from completing all of my training to the absolute best of my ability, is to gain confidence riding on my aerobars. From now on I’m doing my long rides alone (unless I can find some cycling buddies to come with me) and that will give me plenty of time to practise. At this point I’m excited about the challenge of the next few weeks’ training. I haven’t had the ‘I can’t do this’ melt down yet. It may be yet to come!